May long weekend is the perfect time to leave the city and put a random thought into action.

The goal: To drive as far from Toronto as possible and still make it back by the end of the long weekend.

The plan: Draw a circle around Toronto with a radius of approximately 20-24 hours drive in any direction, or 2000 km. Pick a national, state or provincial  park within this range.

We had a few options. Badlands National Park in South Dakota, or Sleeping Giant Provincial Park in Thunder Bay, ON. Eventually, we landed on going state side and venturing off to South Dakota. Not knowing anything about the state, we rented a car, and hit the road on Thursday evening. Day one of the long weekend. 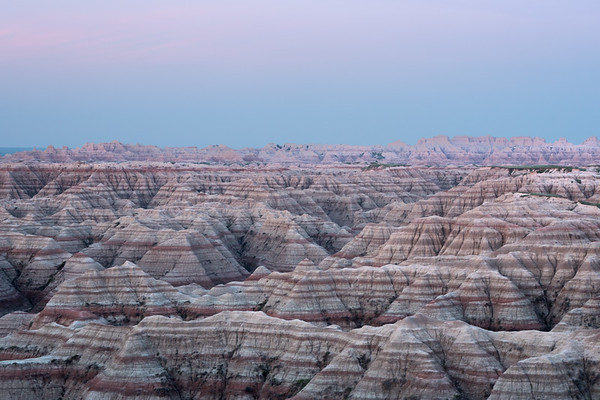 We decided to check into a hotel, get some rest and leave early in the morning to grab some breakfast in Chicago.

Once on the road, we did stop much. We finally made it to the Badlands at approximately 4am on Saturday morning. The peaks and valley are incredible. Badlands National Park was so different from the national parks I have already visited. Not many trees and much more free to roam the park.

There are a few designated trails, however, I think that one could really explore the park by going off the beaten path and find some hidden gems.

After doing some hiking in the park, we decided to drive farther west to see Mount Rushmore. Knowing that we had to be up early the next morning, we drove back to the Badlands and settled in for the night.

We all woke up early on Sunday morning to catch the sunrise over the park before hitting the road once again and making the drive back towards Toronto. We made a stop for the night in Chicago to get some well deserved rest before driving again the next morning.

Total time in the park was approximately 26 hours before we were all back in the car and heading back to the city. Although, we were only in the park for a short amount of time, the point of the trip wasn't entirely based on the final destination, but the journey there.